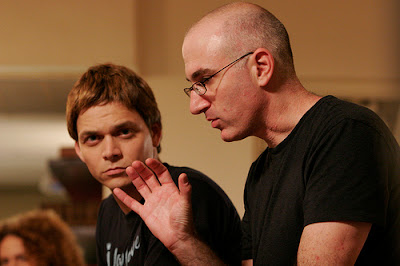 In his new film, The Bubble, out and proud director Eytan Fox continues to grapple with the complexities of gay life – and life in general - in modern .

Having already explored a secret military romance in his debut feature, Yossi and Jagger (2002); then espionage and gay-straight friendships in his follow-up film, Walk on Water (2004); in his latest film Fox turns his attentions to the fraught story of an affair between a young Palestinian man and his Israeli lover.

Set in and around hip Sheinkin Street, in Israel’s second city, Tel Aviv, The Bubble tells the story of Noam (Ohad Knoller, in a strikingly different role to that of macho Yossi, who he played in Fox’s earlier film), and illegal resident Ashraf (Yousef ‘Joe’ Sweid), as they navigate a relationship that is constantly threatened by the divide between their cultures. Complicating matters is the bitchy Yali (Alon Friedman), Noam’s jealous housemate, and an impending ‘rave for peace’ that the group are working on with the help of another housemate, Lulu (Daniela Wircer).

Alongside this all-too-human quartet is another important character; that of Tel Aviv itself.

“I live in Tel Aviv, and I really wanted The Bubble to be a love-song for Tel Aviv, to show the world that it’s different to the representations of other parts of the country that people see in the media outside ,” Fox enthuses.

The director says he also set out to explore the liberal attitudes and liveliness of Tel Aviv’s youth culture in the film; attitudes which too often collide against the harsh reality of Israeli daily life.

“I really feel for young people living in ; they’ve been subjected to such terrible circumstances of living for so many years,” Fox says. “Young people should be going to university, discovering who they are and falling in love; enjoying life. But these people have to go into the army at 18, and be involved in war and occupation, and live in terrible fear.”

Consequently, he explains, they have developed a means of sometimes ignoring the world around them in order to survive; which consequently sees them derided for living in a bubble, a criticism Fox adopted as the title of his film.

“This bubble system that they’ve created for themselves; it’s a survival mechanism,” he says compassionately.

“It’s a system where they say ‘I will deal with this today, I won’t deal with this tomorrow’. In , if you don’t have that monitoring, that bubble system, then reality comes in and attacks you from everywhere.”

It’s a reality which, as an openly gay artist, Fox has been instrumental in slowly helping to change.

“We had the withdrawal from the Gaza Strip, and this was a very big thing in ,” he says by way of illustration.

“The people who ran the show were a big, high-ranking army officer and a high-ranking policeman, and they managed the withdrawal peacefully, without casualties. They were chosen as men of the year, and everyone adored them, these macho Israeli men,” Fox continues.

“But in an interview, one of them described an emotional moment, as they stood overlooking Gaza, as the sun was setting and he realised the operation was over. He said, ‘We felt like Yossi and Jagger’. This was a macho, straight, top Israeli army officer using a gay love story between two men to express intimacy between him and another man. When I head that, when I heard them use my film, that story, to describe their relationship, I said, I can rest in peace now. I did my thing.”

The Bubble screens July 28 and August 7 at the International Film Festival. www.melbournefilmfestival.com.au

Posted by richardwatts at 6:21 pm

I think you can say you prefer the Macho Yossi without too much trouble this time.

Thanks for the review incidentally. I might almost have to leave my house to see it!